On May 15, 2017, EPA regulations took effect that required all wood furnaces to include smoke the law changed on May 15.
reduction technologies and be certified by third party test labs. Some furnace manufacturers started educating their retailers early and stopped shipping uncertified furnaces during the winter. Others continued to ship units, and many retailers continued to advertise and sell uncertified furnaces after

Indoor wood and coal furnaces—also called warm, hot air, or forced air furnaces—were very popular in the US through the early to mid-1900s, then gradually their lost market share as fossil liquid fuel furnaces gained traction in the late 1900s. Then, outdoor wood boilers gained favor, becoming a far worse threat to local air quality than indoor furnaces and boilers had been for decades.

The Alliance began contacting retailers advertising uncertified furnaces to find out whether they knew about the change in regulations and how responsive they would be to information about the change. “We believe that all manufacturers and retailers should play by the same rules, so that the ones who do follow the rules don’t get undercut by ones who do not,” said John Ackerly, President of the Alliance for Green Heat. “And, we found that many if not most retailers will stop advertising products that are not legal to sell if they are politely and professionally approached by an organization that is knowledgeable about the rules,” Ackerly said.

AGH Project Manager Melissa Bollman contacted nine retailers advertising uncertified furnaces. Of those, six stopped advertising those boilers within 2 weeks. Some of the furnaces were removed from the website entirely or are listed as unavailable, while other models that were previously advertised as capable of burning wood or coal have been rebranded as “coal only” to comply with EPA regulations.  Currently, if a stove or boiler is advertised as being able to burn wood, it must be tested and certified to burn wood.  (The EPA does not regulate coal heaters and some manufacturers have just added a grate and continue to sell the same unit as “coal only”.)

AGH efforts were not always effective, and a few retailers still appear to be advertising uncertified wood furnaces (see screenshots below). These include Sears’ online marketplace (orders fulfilled by the third party 123Stoves, Inc.), Homeclick, and HVAC direct. All screenshots were taken on June 22, 2017.

Houzz.com, Wayfair, and HVAC direct continue to sell uncertified wood furnaces or ones that are labeled wood/coal. The units they are selling are all made by US Stove Company, whose business model leaves it vulnerable to illegal sales of its units by multiple retailers.

AGH regularly monitors advertising by manufacturers and retailers in order to better educate consumers about misleading claims. We also publicize the names of manufacturers who provide better information and do not mislead consumers.

This continued advertising and sale of products that are no longer compliant highlights the danger that stranded inventory can pose for retailers when deadlines pass. If the 2020 emission rules are not delayed or changed, some wood stove retailers may get stuck with inventory that they are no longer allowed to sell, but are under pressure to unload to recoup their investment.

Without regulation, wood furnaces often sold for $ 1,000 – $ 2,000, less than many certified wood stoves. Even after the 2017 rules took effect, certified wood furnaces remain affordable with most selling for $ 2,100 to $ 3,200. Ten models are now certified, ranging from a more expensive European-designed pellet furnace at 89% efficiency to a very basic US Stove model 1330E that is 33% efficient.

However, the future of this class of wood heaters is far from secure, as EPA rules require wood furnaces to emit no more than 0.15 lbs/mmBtu as of 2020. Other than the European-designed pellet furnace, the other certified furnaces are not at all close to meeting that standard. Wood furnaces saw extremely little technological development until they were required to be certified between 2005 and 2017, and the sector is far behind the levels of controls that have been built into stoves and boilers. 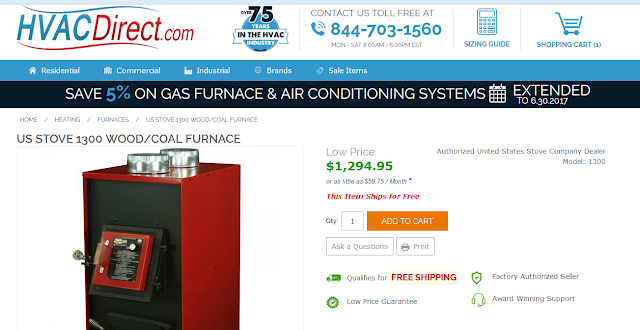 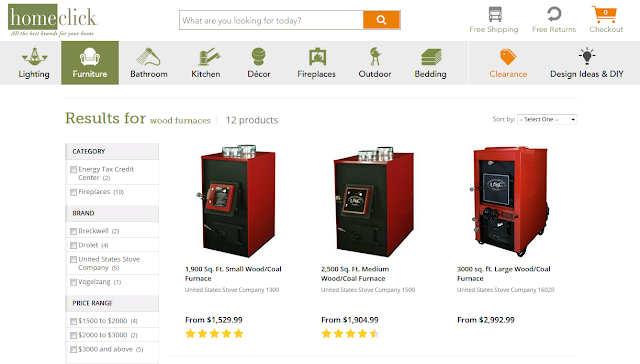 One of the loopholes in the new EPA regulations about to close
One of the big loopholes in the new EPA wood and pellet heater regulations is closing this month.  Small forced air furnaces were required to meet new emission regulations in May 2016, but many very small furnaces declared themselves to be large furnaces, giving them until May 2017 to meet the new standards.  As of May 16, 2016, all forced air furnaces, large and small, must emit no more than 0.93 lbs per mmBTU of heat output regardless of whether they are wood or pellet units.
Currently, there are six forced air furnaces that are certified, four of which use wood and two of which use pellets.  The average emissions rate ranges between 0.06 to 0.84 lbs, with the average at 0.411 lbs, less than half the current standard.  However, as of 2020, this class of heaters must meet a far stricter standard of 0.15 lbs/mmBTU.  (This is the subject of litigation by the HPBA.)  Only one of the current six models, the Maine Energy System Auto Pellet Air,  emits less than 0.15 lbs, but it has to be retested using a different test method to comply with the 2020 standards.
Of the six currently on the market, there is a huge efficiency range, from 48% to 89%.  Both ends of the spectrum are listed as pellet heaters.  At the top end is the Maine Energy System’s Auto Pellet Air, which was developed by OkoFEN, a leading pellet boiler company in Austria.  At the bottom end is US Stove’s 8500 multi-fuel furnace.  (US Stove also has a certified cordwood furnace that has lower emissions and higher efficiency than this pellet model.)  The average efficiency of the six

At the end of May 2017, it will be clear how which forced air furnaces did not get certified.  There are many more coal furnaces on the market today, compared with 3 or 4 years ago, as some companies have added grates and other slight modifications to outdoor wood boilers and furnaces in order to keep them on the market as coal units.  Coal heaters are still not covered by EPA emission regulations, so renaming a wood boiler or furnace a coal boiler or furnace is still a loophole used by some companies.

Alliance for Green Warmth, December 1, 2012 – Wooden and pellet stoves are a secondary gasoline of selection for several of us who mainly warmth with oil, propane or electric power. But when it comes to expense savings, fuel furnaces give the cheapest kind of fossil gasoline heat. Deciding on a reputable brand name of furnace is still critical, and the December 2012 concern of Client Studies advised customers to think 2 times about York furnaces which broke down about two times as typically as other brand names.

Bryant, Trane and American Standard furnaces needed repairs the minimum usually, according to the Consumer Report survey of 32,251 appliances purchased by subscribers of the journal. Numerous other makes, which includes Provider, Rheen, Ruud and Lennox, held up virtually as well. Consumer Studies also has exceptional common guidance about buying a fuel furnace.

Client Studies has in no way carried out a big study of wooden or pellet stove trustworthiness, though they did take a look at and assessment six pellet stoves in February 2011. The magazine gave optimum rating to the Harman P68, which, at $ three,900, was also the most high-priced of all the pellet stoves they reviewed. A close next to the Harman was the Napoleon NPS40 which value only $ 2,350, and rated larger than 3 other much more expensive models from Lopi, Enviro and Quadrafire. At the bottom of the list was Summers Heat 55-SHP10L, made by Englander, but that model only cost $ one,300 and is typically considered a excellent price.

Shoppers Stories has never examined wooden stoves, so never subscribe pondering you will find any scores or tips. Each wooden and pellet stoves are worthy of significantly far more consideration from customer businesses as there is tiny dependable 3rd social gathering testing and dependability surveys. The screening that Consumer Reviews did of pellet stoves in 2010 did not incorporate reliability, noise levels for pellet stoves or how a lot electricity the stove drew.

Wooden stoves are inherently a lot more reputable and frequently require small repair, other than cleaning the chimney yearly and changing the gaskets every couple of many years. Even so, the sturdiness of many wood stoves, even though a offering point, can also be a drawback because numerous folks maintain their old, inefficient and polluting stoves for too lengthy, not recognizing that more recent ones can save them up to fifty% on fuel price and be considerably far better for their overall health.
Heated Up!


In Could 2010 the Alliance for Eco-friendly Heat wrote to the IRS, urging them to appear into the subject of unqualified outdoor wooden boilers claiming to be 75% successful. The Alliance had discovered a single producer, Shaver Furnaces, who had accredited their unqualified boilers as seventy five% efficient decrease heating benefit (LHV) making it possible for consumers to declare what was then a $ one,five hundred tax credit rating.

In excess of a calendar year afterwards, the IRS issued a ruling, locating that Shaver Furnace “failed to meet up with the effectiveness ranking of at least seventy five% as calculated using a lower heating price.” The IRS revoked the businesses appropriate to offer a certification on which future purchasers of the furnace can count. The ruling did not influence the capability of Shaver consumers to consider the tax credit score prior to the day of the ruling, Nov. 28, 2011. It does not seem that the IRS imposed any wonderful on Shaver.

The Alliance for Eco-friendly Warmth is not aware of any other producer who has been denied the appropriate to declare 75% effectiveness, but has been quite crucial of the market follow that enables almost every wooden and pellet stove to declare 75% performance. In actuality, wood stoves that claim seventy five% effectiveness may possibly be under 65% productive LHV and some pellet stoves are below sixty% LHV, with some even beneath fifty%.

Four days ahead of the IRS ruling, Shaver Furnace place out a recognize on its Facebook web page expressing “Shaver Furnace is very pleased to announce that the Shaver Professional Sequence one hundred sixty five, 250, 290 and 340 designs have all been tested and qualified to be 75% effective or far better and this allowed us to supply you a certification to get the $ 300 Federal Tax Credit rating for 2011. Being eligible for the tax rebate implies that your Shaver Furnace will burn up much less wooden than with other manufacturers who don’t qualify for the rebate and therefore you will use much more wooden with the other – becoming considerably less than 75% effective. That is evidence, not just rhetoric.”

A chart of outdoor wooden boilers, presumably manufactured by Shaver Furnaces, listing which organizations qualify for the IRS tax credit gave a inexperienced “yes” only to Shaver Furnaces. Other producers, such as Central Boiler, Heatmor and many other individuals ended up all detailed with a crimson “no.” The site stated a pink “no” designates “WORST or undesirable.”

Shaver Out of doors Furnace still claim to use “up to twenty five to fifty% less wood in contrast to other heating techniques.” Their internet site states:

“Considering that the Shaver can melt away larger parts of wooden it will dramatically reduce the time loading the furnace and the time spent reducing the wooden – and there is no splitting. Furthermore the wooden burns much better and a lot more totally. Costs for huge spherical items are also drastically significantly less than for shorter parts of break up wood….. As soon as the drinking water heats up to the temperature you established it at, the supporter goes off, enabling the fireplace to just smolder.”